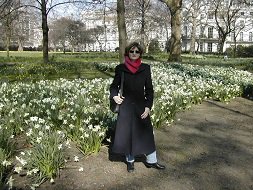 I’m now back in the UK for a few weeks. I was in the supermarket yesterday and decided to look at bread and ingredients. I was in shock – every loaf of white bread (about 12 different varieties) had soy flour in it!

A couple of weeks ago I accompanied my father back to his cardiologist for his end of month visit. The result is that my father is staying off Lipitor as he was feeling fine and he’s going back at the end of the year for his annual stress test.

Just before we went back for that visit, my father had to see a surgeon and anaesthetist (as he has to have some minor surgery soon) – they both said that they didn’t see the need for dad to be on statins either. So that was a comforting affirmation!

I was watching an Australian cooking show the other day which has a ‘cook’ and a ‘chef’ both demonstrating, when one said to the other – ‘I hear that saturated fats are actually good for us now’. It was great to hear that being stated on a cooking programme!

The other night while driving home from somewhere, I was listening to the ABC radio (the Australian equivalent of the BBC) when someone stated out of the blue – ‘cattle shouldn’t be fed grain but raised on grass’. Once again, it’s wonderful to hear these things being said out in the public domain…

Hands up, who has a healthy mind?
Make Your Own Superfood Bircher Muesli
The Low Fat Con
Grief comes in many forms...