Sunshine on my shoulders… Part 1 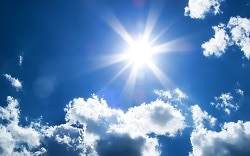 …makes me happy…  It seems these famous lyrics from the John Denver song are actually very true words!  Vitamin D not only helps ward off depression, it helps boost our immune system too.

But Vitamin D is much more important to our health than just improving our mood.  It’s needed to help absorb calcium.  Do you remember Rickets being mentioned by your parents or grandparents?  It’s a deficiency of Vitamin D, calcium or phosphorous which leads to a softening of the bones and potentially fractures or deformity.  And it’s making a comeback!

In the UK rickets in children has increased 4-fold over the past 15 years. Children are just not getting enough sunshine anymore.  It’s easy to see that they are spending so much time indoors now – what with video games, the internet combined with parents’ fear of their children play outside out of sight!

Rickets has not been seen in the UK since the 1950s.  Mike remembers being given a large spoonful of cod liver oil followed by Virol malt extract every morning in winter during the 1950s.  And he proudly states that they survived extremely severe winters with no central heating!

So why cod liver oil? It’s high in Vitamin D!  It has the added benefit of high omega 3 and vitamin A.  Note that pregnant women need to be careful with vitamin A intake levels.  My preferred cod liver oil supplement is the Green Pastures, Blue Ice as uses an old fashioned fermentation process without heat which keeps the nutrients intact…

But it’s not just any vitamin D.  We’re now learning about Vitamin D2 and D3.  Vitamin D3 can be made in the body by exposure of the skin to ultraviolet B (UVB) rays from sunlight.  Vitamin D3 is also found in oily fish and cod liver oil.  Vitamin D2 is produced by yeasts/ fungis and some controversy exists over whether or not D2 can fully substitute for vitamin D3 in the human diet.

That gives us another reason to trust the old fashioned remedy and stick to old-fashioned fermented cod liver oil supplements.  At least we can now get in a capsules rather than having to drink it by spoonful!

The best way, however, to get Vitamin D is by the sun as the body has a built in mechanism for preventing toxicity with vitamin D produced in the skin. Supplemental vitamin D bypasses this built-in protection and, if excessive amounts are consumed over a period of time, blood levels can reach a point where toxicity is possible.  (Ref: Mayo Clinic)

So what about skin cancer?  When’s the safest time to get some sun?  How much sun shine do we need?  Can we get our Vitamin D through a window?  How does sunscreen affect our ability to absorb Vitamin D?

I’ll be looking into those questions in Part 2…  So get some sunshine on your shoulders and keep smiling.

These questions are now answered in my blog – Sunshine on my Shoulders – Part 3.

Cornwashing!
Which juicer is best?
The Health Benefits of Ginger
BPA – Not Fantastic Plastic!