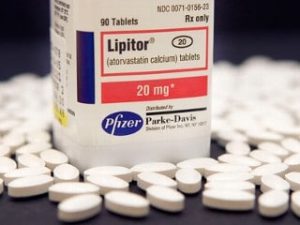 The statins (or HMG-CoA reductase inhibitors) are a class of drugs that lower cholesterol levels. The first results can be seen after one week of use and the effect is maximal after four to six weeks.

Coronary Heart Disease (CHD) – not caused by cholesterol levels but inflammation of the artery walls, which may be caused by (but not known);

Cholesterol levels are an indicator of risk of CHD in middle aged men, but not the cause of CHD.

Reduce inflammation of the artery linings naturally by:

Cause of Statin Side Effects:

The reasons for statin drug side effects are better appreciated by using this figure of the Mevalonate Pathway ( also known as the HMG-CoA reductase pathway ) adapted from any medical school biochemistry book.

Statins act by inhibiting HMG-CoA reductase as indicated in this figure. All metabolic functions further down the pathway are consequently affected.

1) Cholesterol Inhibition
Not only is glial cell cholesterol synthesis in our brains vital for memory function and cognition, cholesterol also is the substrate for our most important homones: aldosterone, cortisone, estrogen, progesterone and testosterone as well as the quasi-hormone, vitamin D (calcitrol). Cholesterol’s vital role in membrane structure and function and lipid raft formation, makes it of critical importance in cell identification, cell communication and immunodefense.

3) Dolichol Inhibition
Dolichols are vital to the process of glycoprotein formation in the endoplasmic reticula of cells. In this capacity it is critical to the formation of the glycoproteins involved in neuropeptides, cell identification, cell messaging and immunodefense. Reduced bioavailability of dolichols can affect every cellular process in the body.

4) Tau Protein Synthesis
When normal phosphorylation is interfered with by mevalonate blockade, our cells increase the production of Tau protein. Tau is the protein substance of the neurofibrilatory tangles common to Alzheimers and other neurodegenerative diseases.

5) Selenoprotein
Only recently discovered were selenoproteins and the effect of statin blockade of the mevalonate pathway on their role in human physiology. Deficiency of selenoproteins has been proven to result in various types of myopathies formerly seen only in areas known to be deficient in this trace element. Additionally cognitive dysfunction is known to be associated with selenium lack.

6) Nuclear Factor – kappa B (NF-kB)
The benefit of statin drugs in cardiovascular disease control is in their ability to inhibit this vital transcriptase. The entire anti-inflammatory and immunomodulatory effect of statins is mediated by statin inhibition of nuclear factor-kappa B. Improvement in atherosclerosis results from the inhibition of the key inflammatory elements: smooth muscle migration. lymphocyte adhesion, macrophage attraction and platelet activation associated with inhibition of NF-kB. The immunodefense system is also keyed to NF-kB, explaining the changing patterns of certain infections and cancers. The rise in cancers of all kinds secondary to statin use is of major concern.