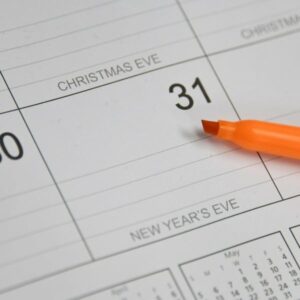 Welcome to another new year!

So I’m going to talk about new year’s resolutions.

Now by this time in January, there’s a good chance you might have already broken some, or all, of your new year’s resolutions.

That’s because we get into this ‘New Year’ excitement in early January that we’re going to create this year in a different way. That this year things will be different.

Usually we’ve eaten too much and drunk too much, so often new year resolutions are something like: “well, I won’t eat this”, “I won’t eat that”, “I’ll go to the gym” and so on.

But what I want to say to you is – this year we will do something a little bit different.

What I want you to do instead, is ask yourself the question: “who do I want to become this year?”

So really what I mean by this is – we want to have something that we are going to step into. This idea of a lifestyle that you want to create.

You usually know what it is because you might feel resentful when you watch that person. It might be somebody you know in your real life or it could be a celebrity. Usually it’s certain aspects of what they are doing that you want.

But instead of being resentful of this person, what I want you to do instead is to project yourself to the end of this year. Ask yourself:

Then you have to become a certain person so you will be a different person by the end of this year. Now I want you to close your eyes and visualise that person.

I want you to see, be, breathe, live that person within your mind. Start asking yourself questions:

“What do I need to do to get there?”
“What steps do I need to take now?”
“What might be the first thing I have to do?”

By doing those things, you’re going to change each day, little by little. Making these little steps toward becoming that person that you visualised. So very slowly by the end of the year you will have created a different way of being.

That’s how you can re-look at your idea of New Year’s resolutions for this whole year.

That’s how you are going to live a much more beautiful, upgraded and more spectacular life…

Will Your New Year's Resolution Last?
This Valentine’s Day, Love Yourself First
Meditation For Ecstasy
Drink Your Greens