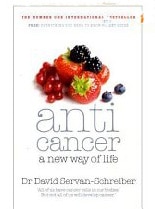 I haven’t mentioned this before, but my step-daughter was diagnosed with breast cancer last year.  She has gone through surgery and has almost completed her chemo plan, to be followed by radiation therapy.  At the tender age of 37, with 2 small daughters, it’s been an emotional time.

As you might expect, we’ve all been doing a lot of research and reading into how to combat cancer & its recurrence.  This blog entry is not going to go into depth in that area as I don’t feel I’ve researched enough yet – I’m sure I will at a later date…

Today I’m focusing on soy because I was reading an excellent book called ‘AntiCancer’ by Dr David Servan-Schreiber.

He is a doctor of psychology and neuroscience and was diagnosed with a brain tumour.  Based on his dealings with doctors and his own experiences he has developed his theory on managing cancer through foods to embrace and those to avoid in order to stimulate the immune system.  It all sounds very sensible and logical – except for one thing:

He advocates the use of soy and bases his opinion on research that says that Asian populations have historically had low rates of cancer.  Therefore, he concludes, all soy is good to reduce the recurrence of cancer.  I believe this is too simplistic and potentially incorrect!

What he doesn’t take into consideration is the provenance of the soy…  He has not acknowledged that traditional Asian diets included only fermented soy – not the modern industrially produced soy milk, flour or oil.

My previous blogs (So, Now to Soy) have already commented on the huge health implications of non-fermented soy, including the points that traditional Asian diets only consumed small amounts of soy (as condiments) plus the Cancer Council NSW warns women with breast cancer to be cautious of consuming large amounts of soy products due to the risk of potential tumour growth.

He does go on to state that since the modern Asian diets have become more Americanised the rates of cancer have increased.  He states in an interview “So pay attention to what you eat. Reduce the things, like white sugar, white flour, omega 6 fatty acids, which includes red meat, and a number of dairy products.”  I agree with the sugar, flour and omega-6, but including red meat and dairy under the omega-6 heading tells me he has not considered the provenance of his food.  In the USA most animals are grain fed (often soy which is high in omega-6) which makes its meat and products disproportionately high in omega-6, whereas grass fed animals have the correct omega-3/omega-6 ratios (see my blogs on omega 3 & grass vs grain fed animals).

In addition to this, has the increase in non-fermented soy products contributed to this increase?

Once again we come back to Provenance of our food!  Not only is the type of food important plus the origins eg organic, but also the processing procedure eg soy oil extraction. Just because soy milk may be organic or beef fed on organic grain, it doesn’t make it healthy!

Here’s to our health…

Climb for the Cure…
Claire Maguire - The BBC Good Food Show
The Health Benefits of Ginger
Not so fishy!